The official website of the Northshore Tea Party, the official Tea Party organization of St. Tammany, Washington and Tangipahoa Parishes in Southeast Louisiana.

Official blog of the Northshore Tea Party. Blog will feature contributions from a number of Tea Party members discussing news and current events that are of interest to the Tea Party, providing coverage of Northshore Tea Party events and rallies, and featuring commentary regarding politics and elections of relevance to the organization.

Where is the Northshore Tea Party Located?

The Northshore Tea Party is located on the northern shoreline of Lake Pontchartrain in southeast Louisiana.

The majority of our members come from Washington, Tangipahoa and in particular St. Tammany Parishes.  The towns/cities of Covington, Mandeville, Madisonville, Abita Springs, Slidell, Lacombe, Goodbee, Pearl River, Bush and Folsom are responsible for more than half of the Northshore Tea Party's membership.  While most of our members are residents of the Northshore, it is certainly not a requirement for joining or attending a rally.  We have had attendees at our events coming from as far away as Metairie, New Orleans, Baton Rouge and Mississippi's Gulf Coast.

Anyone who shares our belief in limited Constitutional government, reductions in both taxes and spending and general fiscal responsibility is welcome to join our organization.

Most Northshore Tea Party events are held in western St. Tammany Parish, with the bulk of them occurring in either Covington or Mandeville.

Do you know of a good location for a Tea Party event? Feel free to share your suggestions in the comments.

Having attended my share of Northshore Tea Party rallies, it has occurred to me that the loose-knit organization has been desperately lacking its own theme song. Needless to say, the little wheels in my brain started turning and I decided to do what I could to help fill the void.

I didn't have to look far to find my nominee to be the official anthem of the Tea Party. The first two songs appearing on one of my personal favorite musical albums of all-time are, in my opinion, perfectly suited to represent the Tea Party, and particularly its rallying cry of "Don't Tread On Me". That album, not coincidentally is Three Eleven's 2005 release by the same title (Don't Tread On Me).

The first two songs appearing on the album are Don't Tread On Me and Thank Your Lucky Stars. The former emphasizes the Orwellian nature of the current American political makeup. Where leftists are lauded for bankrupting the country and the Tea Party is blamed for seemingly all of society's ills, the song embodies the stance Tea Party members must take, acknowledging the inevitable ridicule that accompanies doing so. 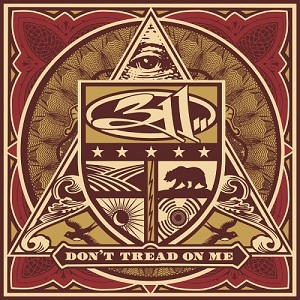 Take the song's first line: "Before you point it at me, there is a possibility, you'd better turn that thing around." This line to me speaks to the finger of blame that is seemingly always being pointed right in the face of conservatives and the Tea Party. The left-wing media, college professors and Hollywood celebrities are always cutting up about how bad the Tea Party and conservatives in general are for the country. The first line of this song so astutely suggests those left-wing types reconsider their position, as the responsibility for plunging our country down the toilet lies with them, not us.

Thank Your Lucky Stars is a classic American patriotic anthem celebrating the blessing of being born an American. Because I could write a thesis paper going line-by-line, I am instead going to simply publish the lyrics beneath the video below.

Essentially, the song discusses the chronic negativity emnating from the political left, and puts into perspective how lucky those of us who were blessed to be an American really are. The song discusses the herd mentality essential to the left's success, and accurately points out that if the country continues heading down the same road, the freedoms we enjoy as Americans may be in serious jeopardy.

Anyway, without further adieu, here are the two songs I hereby nominate to serve as the unofficial Tea Party anthem:

Three Eleven - Don't Tread On Me

Because Don't Tread On Me is more a refrain-based anthem, I am not going to post the lyrics here. The words are easy enough to understand when listening to the song, so if you're interested in the lyrics, just play the video or run a web search for 'Don't Tread On Me Lyrics'.

I need a break something inside me said
From TV people counting the dead
A break from all the sadness is what I need now, yeah

We're in a place I thought we'd never get
People devolved and fought or they fled
But I do not know how we're goin' to get out of it, woah

And what's the point, we're gonna pay
Sort it out one way or not we all have that day
So make your choice

As you can see from the lyrics, this one's a doozy. In addition to the things mentioned above, the song covers the fear and hostility associated with liberalism, the fact that it takes a strong person to overcome the pressure to blindly join up with the liberal mob, and suggests that we the thinking people of America should make it a point to challenge them --- and that our country and our freedoms may depend on it.